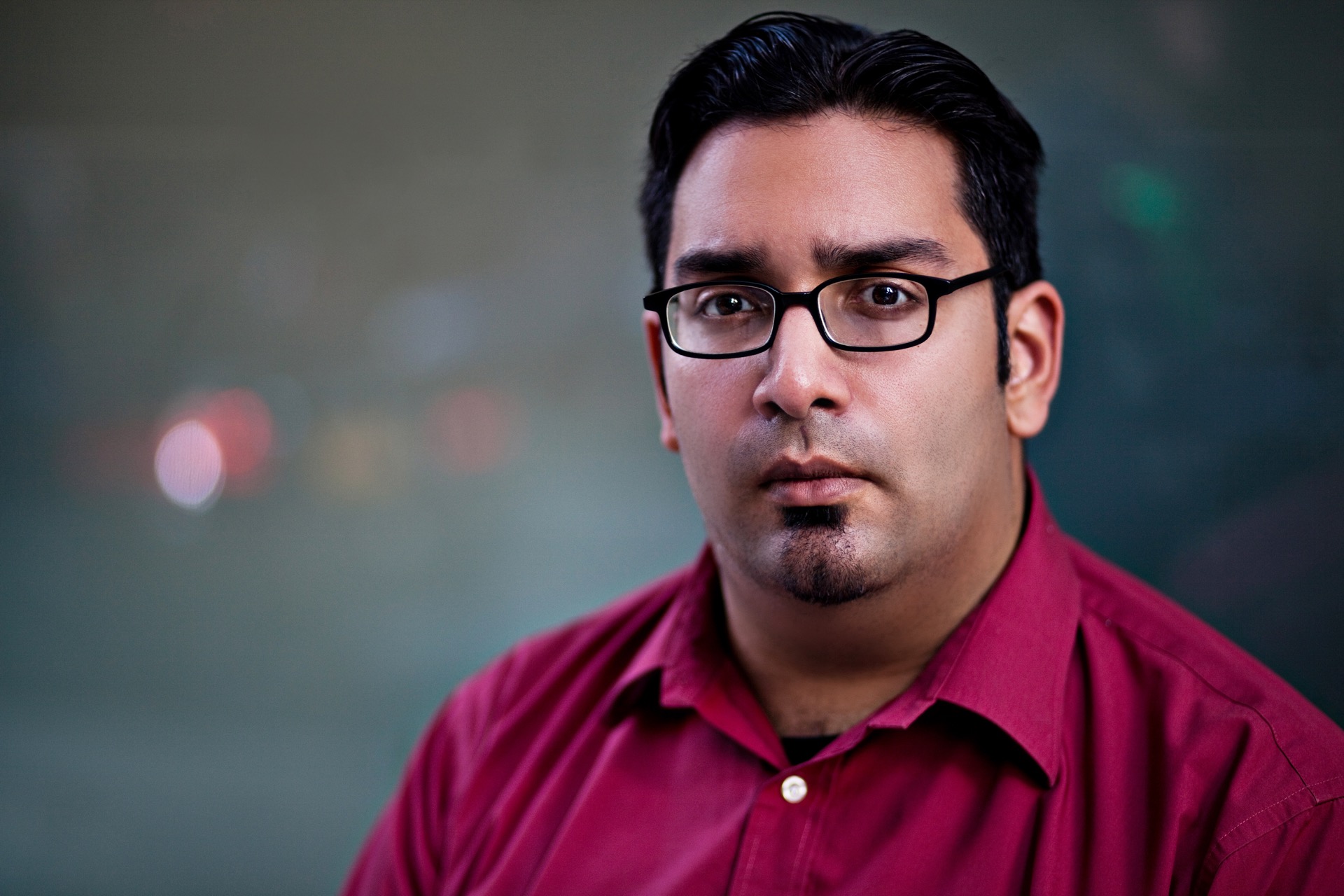 Gabriel Leal is a comic book writer for Infinity Comics. I interviewed him on June 1, 2013 in NYC. He was 37 when we spoke.

I suffer from bipolar disorder. It’s so bad I can’t hold a real job. I also have Attention Deficit Hyperactivity Disorder.

It’s trial and error, ‘cause I’m aware of everything going on at once: the people talking, the food, [people walking by], the fans going, outside, the traffic, the traffic lights—everything’s going on at once. Dealing with my depression is tough because there are days in which I just want to give up. Everything overwhelms me like a shroud.

I’ve always been bipolar since I was a kid in grade school, but I think the catalyst was when I was involved in an abusive relationship with a woman years ago. Things were great until we moved up to Albany. It’s a beautiful city, the old buildings, but there’s a sense of decay and despair underneath the façade of the capital, and I think that affected us on a spiritual level. She became reclusive, aggressive, and that just made my depression worse. I took it in stride as best as I could, and then in 2009, she asked me to leave because she knew what she was doing to me was wrong and she couldn’t handle it.

I moved back to New York and it’s been four years of hell. I tried committing suicide at least twice…

Des: How did people react after either attempt?

Gabe: “How can you be so stupid? You’re being selfish.”

They can’t understand the pain. I mean, how am I being selfish if I’m not afflicting my pain onto other people? I just want to be happy. I just want this to end. It’s not a stupid decision. I’ve thought about it thoroughly. I don’t know. It’s just… it’s not selfish. If you cut yourself and you’re hurting, what do you do? You treat the wound. And this pain I have is just… I’m at my wit’s end. That’s why I consider suicide.

Des: I think people don’t… it’s one of those things that if you’ve never been there, you can’t put yourself in their shoes.

And then you think about it. You’re like, ‘Wait, what kind of pain must the person have to be in to essentially forsake everything?’

No one ever thinks of it that way. In that case, it’s not selfish. It’s a fucked up way of coping, certainly, but it’s the only thing that you can think of.

Tell me more about the Internet, ‘cause it sounds like the Internet has helped you, and I feel like a lot of us who are depressed kind of gravitate toward [it].

Gabe: I can escape. I can go where people won’t judge me… That’s one of the best parts about the Internet is you’re always gonna find something that’s gonna help you. That website you gave me about the interactive fiction. Holy shit, that really hit home. [Ed. note: Depression Quest is a text-based, interactive fiction game where you play as someone living with depression.]

When I talked to you about it the next day I was like, ‘Alright,’ and I played it through, but that was…it’s amazing how a little bit of text [can be so] intense.

Gabe: Yeah, and I know it’s just a program, but I felt as if it was empathetic. It knew where I was coming from and it was very cathartic just getting it out, playing [it]. That was great.

Des: What killed me about it was that you lose options. And it’s just true. It’s a simple way of expressing something that I certainly never have the words for on my hard days. The ways that people make art about that kind of pain is really great. I had never, ever thought of a videogame…

Tell me about the comics.

Gabe: It’s a good form of release. It’s a good form of escapism. I mean, I write these stories of heroes fighting evildoers, people being saved. In fact, one of my characters, the Red Phantom, a Pulp Fiction style hero, is bipolar and it reflects in his actions when he interacts with civilians and villains. There are some days in which he’ll lose control and he’ll be just absolutely brutal in dealing with criminals, and then other times, he’ll just feel utterly despondent and lost, and that affects him when he tries to save people. It’s good therapy…

I would say we have several hundred fans on our Facebook page. Reviews have been good of our stories.

Des: How do they respond to a bipolar superhero?

Gabe: Some of them are like, “You know, that’s not a role model for kids. That’s not right.”

I tell them, “Well, you know what? Batman, if you were to analyze him, he has a martyr complex, he’s obsessive compulsive, he’s narcissistic, he’s vengeful, he’s hateful. Those are all negative flaws. He’s a flawed hero. Superman is naïve, thinks overly idealistic.”

That’s why we relate to them, because they have human-like qualities. So I tell them that and some of them still react negatively.

I tell them, “You know what? I’m writing these comics for people that want to escape. They want someone they can relate to.”

Des: Do you get positive reactions?

Gabe: I have a couple… I have a kid in Boston who loves the Red Phantom. He says he loves the retro, [old-timey] look because it’s set in 1940s New York. He loves the Fedora and the black mask and the suit, and he likes the fact that the hero goes through emotional crises off and on—he’ll have an episode and he’ll go out to fight crime and he tries to keep it under control from going over the edge. He likes that because the [he] has a temper problem. He’s also somewhat autistic so he can relate to the flaws of the hero…

Des: How long have you been writing this character?

Gabe: I’ve been at Infinity Comics for around two and a half years. I’ve been doing the notes and research for the Red Phantom for five years now, so [I’ve] got hundreds of stories ready to be cranked out…

Des: Do you think that a community of people who have been there would be helpful?

Gabe: Yes. Yes, I think it definitely would. I admit I have not been actively looking for such a group because last year I joined such a group, but it was mostly people in their fifties or sixties, so I couldn’t relate, but I think a community would be awesome…

Des: Do you have any friends in New York?

Gabe: The ones that I do have, they’re married and they have their own lives. I got nobody.

Des: What about your mom?

Gabe: My mom is an old world Hispanic. She doesn’t believe that mental health is a big issue. In South America, depression is seen as a no-no. You can’t discuss it. Let’s just say psychology is not big in South America, so I can’t go to her for help…

In fact, the first time I told my mom, it was in 2007. I was officially diagnosed, really full-blown bipolar disorder. I told my mom over the phone. I called her up and she actually got angry at me.

She hung up on me. So there’s no support there…

Des: Are you on medication?

Des: How do you feel about it?

Gabe: On the good days, when they work, I’m even, I’m fine. I’m happy, not manic, but even-keeled—but there are days which the dam breaks and I just… the medication just fails completely and I just shut down. I break down in tears randomly. It’s horrible because the best way to describe it, it’s like a cold waterfall. It just washes over you and you have no control over it…

Gabe: Yes. Honestly, it is. I mean, if things don’t improve, I don’t know what I’ll do. My mom just came back from Buffalo on a trip to Columbia and she didn’t tell me this over the phone because she didn’t want me to worry, but she just told me when I picked her up today. She had a heart attack over there, and the doctor said that if she’s not careful, she could die in two years. So, basically, if I don’t do something to improve my life and my mom dies, I’ll be alone and homeless. So, I’ve got this sense of urgency. But yeah, suicide is an option, yeah. Yes, it is.